It's almost August. For us here at Waterloo, that means final exams are approaching fast. That doesn't mean we didn't get anything done, though; because we won't have an easy access to a machine shop during our co-op term (We've been trying to locate a machine shop in Toronto that would let us work to no avail- The only option is to visit Waterloo during weekends.), we started machining components. Here are some photos of what is going to be our extruder nozzle: 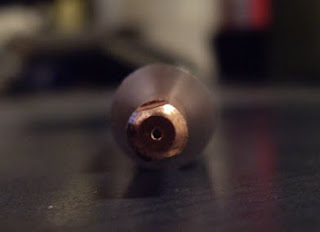 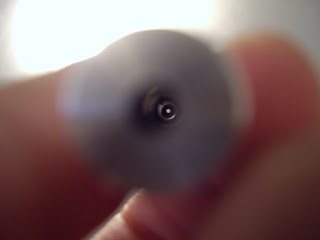 The nozzle tip, which actually is a copper welding tip, is purchased at Princess Auto. It has a roughly 0.6mm (0.023") hole in the middle. It's about 6.1mm (3/16") in diameter and 2.4mm (1") long. It also has an M6 thread (6mm-long). Oh, and most importantly, it costs $5.99 for six of these.
The barrel is made with a half-inch think aluminum rod. There's nothing much to say about it, really.
I'm not certain about the heater barrier, tough; PTFE seems to bulge after prolonged use, and PEEK is hard to obtain (at least here in Ontario, Canada). Eric proposed using layers of Kapton tape; I don't know if it'll work out well, but I guess there's only one way to find out.
Well, that's our physical progress so far. There still is a long way to go to get our own 3D printer up and working, but it's pretty exciting to see tangible things coming together. Next time, I'll share some CAD drawings of the feeding mechanism.
Until next time,
David
Watrapter Project Co-Lead
Posted by Wat.Rapter at 5:12 PM 1 comment:

Well its been quite a while since we last posted, but at the same time I think we've managed to accomplish a little bit. As promised, I've included the xyz stage research. There's only a few of them profiled, but it seems that they are the most searched and most well documented 3d printer attempts.

To simplify the project, we decided to focus on construction of the xyz stages at this point while fiddling with the Makerbot extruder, and then turn to the extruder construction after the xyz stage was finished.

We were to begin the CAD model of the Rapter machine, but then it struck us: What's the point of designing the xyz stages if we can't even buy the materials to make them? Hence began the adventure of checking all the hardware stores.

Turns out looking for cheap but reliable materials is about as easy as finding carmen sandiego. It should be noted that Canada (especially here in Kitchener-Waterloo) is not very hobbyist friendly, making the search for simple things like bearings, gears and timing belts a huge pain. Thankfully with some perserverance, we were able to land some materials. Here's a quick summary of the suppliers:

Local/cheap suppliers for stepper motors, timing belts, and a better selection of bearings is still in the works (McMaster Carr is somewhat pricey and some of the other sites have ridiculous shipping costs due to them being based in the U.S.). If anyone knows any good locations to get some, please let us know by leaving a comment or sending us an email at wat.rapter(at)gmail.com.

In the next post, I'll share some screenshots of the CAD model of our printer design, as well as the pictures of our frame under construction.

Eric
-WatRapter team Co-Lead
Posted by Wat.Rapter at 11:07 AM 2 comments:

Hey everyone, I'm David Shin, the other co-lead of this project.
Since the last attempt at printing, several problems arose. I wrestled with the Makerbot over Canada day trying to get it to work, but with no luck. For the sake of documentation, here are two major problems we're having as of now:
1) Weird Temperature Spikes
The Makerbot we're lent is from batch 9, which means it uses the 1mm thermistor. and as Eric pointed out in the previous post, that means we have to set the extruder temperature to 240C. However, around 230C, a series of weird spikes occur: 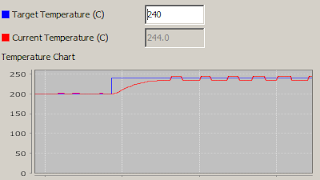 At first, we had no idea what these spikes were. It seemed impossible that the real temperature would just change like that. It also didn't seem like these spikes were caused by the PID feedback loop; after all, the temperature was kept stable at 200C (as shown in the screenshot above).
We spent searching the Makerbot website for several hours to no avail. It seemed like we were the only one with this issue. All out of options, Eric suggested me that I document the problem on this blog for future reference. Halfway through typing the first paragraph, it came to me:
"Hey! It's the signal from the nichrome wire!"
Indeed, LED6 on the extruder board cycled on and off exactly in sync with the spikes on the temperature graph. Suspecting a short between the nichrome wire and the thermistor, I measured the continuity between one of the heater wires and one of the thermistor wires. No continuity.
Puzzled, I started measuring continuity between two terminals, and as it turns out, the resistance between the "B+" terminal and the top thermistor terminal measures to be less than 100KOhm. Well, that's what happened 30 minutes ago. Now, there is no continuity between terminals, and I can't seem to replicate the continuity between any combination of two terminals. (The issue persists, though.).
2) Extruder Motor Refuses to Stop
This issue is just as weird as the first one. We were able to stop the extruder motor on command until today afternoon. However, for no particular reason I can't think of, the motor decided not to follow the stop command. Upon pressing the stop button on ReplicatorG's control panel, the motor briefly pauses, reverses (which is normal), and then starts going forward again.
I have tried resetting the board, swapping the ethernet cable, and even reloading the extruder firmware, but the problem seems to persist.
Well, I got a good (bad?) news. Issue #2 decided to resolve itself. I'm not sure if it's a good thing or not.... Probably not.
All in all, we're stuck pretty deep. I'm starting to suspect a faulty extruder board, but I asked about these issues on Makerbot Wiki nonetheless.
Hopefully we can figure out what's wrong with the Makerbot before this weekend ends. :D
Until next time,
David
Watrapter Team Co-Lead
Posted by Wat.Rapter at 5:02 PM No comments:

So its been a couple of days since our first introductory post, and the Wat-Rapter team has managed to accomplish a couple of things since then (and before then too).

First thing we managed to do was draft together a rough master plan where we throw together all of the work that has to be done, and any other organizational things involved with the project. Feel free to use it as a template for your own 3D printer project. The numbers don't match with chronological order (we'll probably be doing bits of part 1 while doing part 3 for example) so it's more of a list then a plan. Oh well.

The second thing we managed to do was get our hands on a "learning model" Makerbot 3D printer. After some ruffling through the reprap forums while mumbling over our idea, we stumbled across a post by Dr. William Turkel of the University of Western Ontario (http://history.uwo.ca/faculty/turkel/), who kindly allowed us to borrow one of his makerbots to learn from and possibly build mendel parts (if we needed). Here are some of the photos from the trip up to UWO to pick up the makerbot (it took us 7 hours to carefully assemble and test the partially built machine): 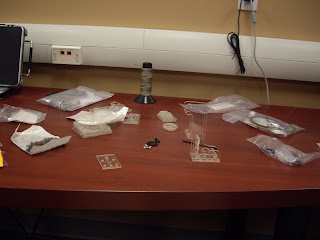 -the extruder parts strewn about a table, waiting to be assembled 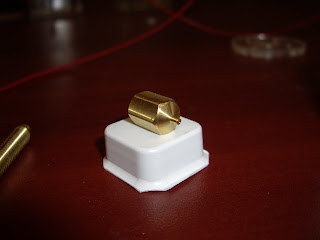 a closeup of the Makerbot's extruder nozzle -me making sure the circuitboards are firmly attached to the side 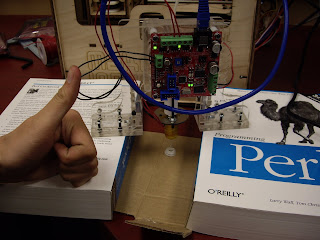 it extrudes! that Perl programming book though is not mine (I don't know how to program in Perl. Yet). 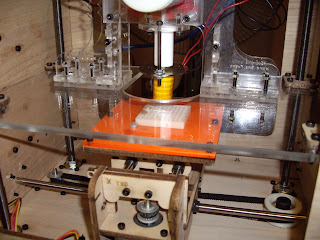 -us printing out our first object back in our university rez. We had to spend a few hours fixing the wacky thermistor and learning about the quirks of operating the machine (We didn't stumble across this helpful blog post until AFTER we did our first print T.T : http://diydrones.com/profiles/blogs/ten-tips-for-getting-your)

Big big big thank yous to Dr. Turkel for lending us the Makerbot, and his Phd. student Devon Elliot for helping us with the assembly and testing.

So that's our progress so far. In the next post, I'll share the results of our research process (one of the first items in the master plan) into existing DIY 3D printers.