Oh boy it's been far too long (4 months?) since our last blog post, and we don't really have a legitimate excuse for not giving an update as to what we've been up to since that time. Co-op has been awesome so far for both me and David, but the downside is that coming home after doing engineering-type work all day makes you want to take a bit of a mental break =P 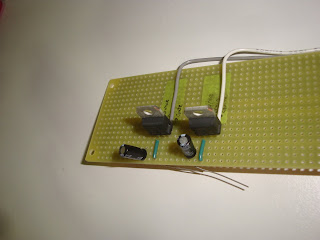 At the same time we still want to get this project done (and working!), so it's small steps right now. Our mosfets and heating resistor that we ordered from digikey back in march just arrived two weeks ago (they were out of stock until June) so the bottom picture shows a picture of the mosfets and the wiring laid out on protoboard.

It looks simple because it really is: long wires coming from the mosfet gate pin for control by the microcontroller, and power connected to the source pin, with the drain pin to be connected to the heating resistor and heated bed. Oh and of course the capacitors used for bypassing and minimizing voltage ripple.

Unimpressive I know, but we don't have any thermocouples to hook up (we were trying to find something cheaper than 38 dollars, but alas we gave up looking and just ordered them and the associated op-amp last week from omega engineering).

-Eric
Posted by Wat.Rapter at 5:37 PM No comments: