So it's been quite a while since the last update, I figured I should at least put down in writing what's been accomplished.

Physically with the printer, the axes have just been completed. The gears and belts arrived recently and have been installed, so all that's left for machining would be the mounts for the electronics and the hot end of the extruder. Now that the co-op term has ended and we're heading back to Waterloo in the new year, machining time should be less of an annoyance.

The electronics though are another matter. Being a complete novice to electrical design (aside from the introductory circuits course I took last term) means everything is going slowly. So far it's been me reviewing the pololu electronics page and getting acquainted with stuff like stepper motor drivers, bypass capacitors, PC power supplies and their voltage rails, etc.

Specifically, I've been slowly re-routing the stripboard layout Adrian made of the pololu electronics on stripboard. Our lofty aim is to reorient it such that all the stepper motor drivers (with heatsinks on the IC's of course) are on one stripboard, and the heater components (extruder, heated bed) are located on the opposite stripboard. A fan would blow through the gap to cool down the heat-generating mosfets and driver IC's.

Hopefully next time I'll be able to put up a rough layout of where items are being placed and how they're going to be hooked up.

Oh and Happy new Year to you all!

-Eric
Posted by Wat.Rapter at 7:10 PM No comments:

This post pretty much is just a heads-up, if there's anyone out there reading this blog.
Yesterday we bought our electronics base, Arduino Mega and four Pololu stepper motor controllers. Called "RAMPS" among reprappers, this system seems to be the most reliable and cutting edge.
We'll probably customize it to to our flavours, or implement a new system altogether later on. For now, though, we're playing safe. It's still long ways till we're actually print something reliably, but I'm getting more and more excited. :D (Eric probably is excited too, but he's just too cautious to express that. :P)
Until next time,
David
WatRapter Co-Lead
Posted by Wat.Rapter at 1:41 PM No comments:

Baby it's cold outside

Well actually unlike the song, it's rather mild for a Toronto December. There's also no snow on the ground =(

Semantics aside, the cold end is nearing completion! 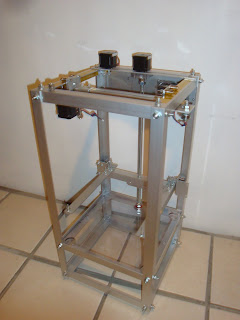 In this picture again is the overall shot of the printer. Main addition is the backplate holding the extruder cold end. 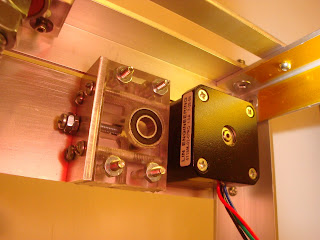 closeup of the cold end. As mentioned in David's post, it's similar to a Wade style extruder with a delrin plunger. The things missing are obviously the gears (which have to be ordered from Misumi and are darn expensive) the hobnobbed M8 shaft, and the delrin plunger. 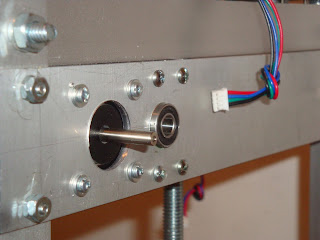 Final shot is the back of the machine, showing the spots where the gears are secured (the dangling wire is from the z axis motor).

Eric
Posted by Wat.Rapter at 3:08 PM No comments:

Hey guys, this is David uploading at University of Waterloo student machine shop. Here are promised pictures of our extruder. Progress has been slow since my computer had issues running any form of 3D manipulation program (Ohwell, time to format.), but here they are. 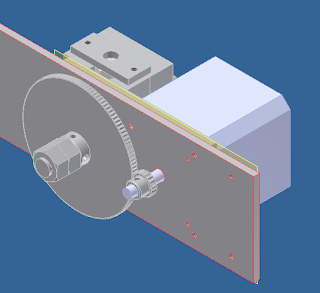 This is the cold end. As you can see, it's a geared stepper extruder. Gear ratio is 6:1. It uses a captive nut to hold the bowden cable in place. 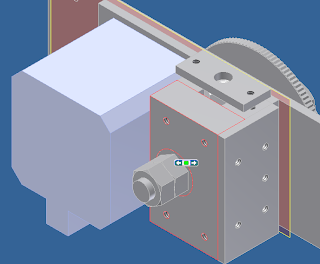 The opposite side of the cold end: There's nothing much to be said, really. 0.5-inch-thick Lexan plate is used since we have plenty of it left over after building the base. 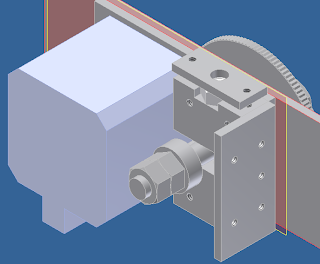 View without the base plate, revealing the ball bearing and the captive nut assembly.
Annnnd here are some pictures of the hot end. 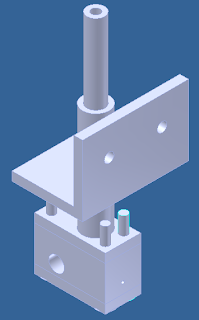 This is the hot and. From the top: Teflon tubing, heater barrier, hot end mount, heater block ,sandwiched between two Teflon sheets. Teflon sheets were added for better thermal insulation. 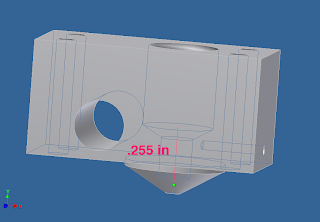 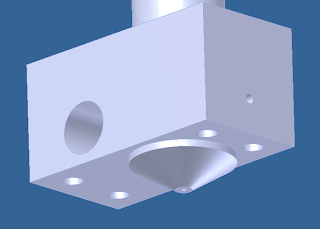 This is the heater block without Teflon sheets. Nozzle is part of the heater block now, for added reliability.
So yes, all extruder components are ready to be machined!
....as soon as a mill becomes available, that is (Hopefully before the shop closes.).
Now that CAD drawings are finally done, I am planning to look into electronics with Eric. We'll post our findings next time.
Until then,
David
WatRapter Co-Lead
Posted by Wat.Rapter at 11:30 AM No comments: